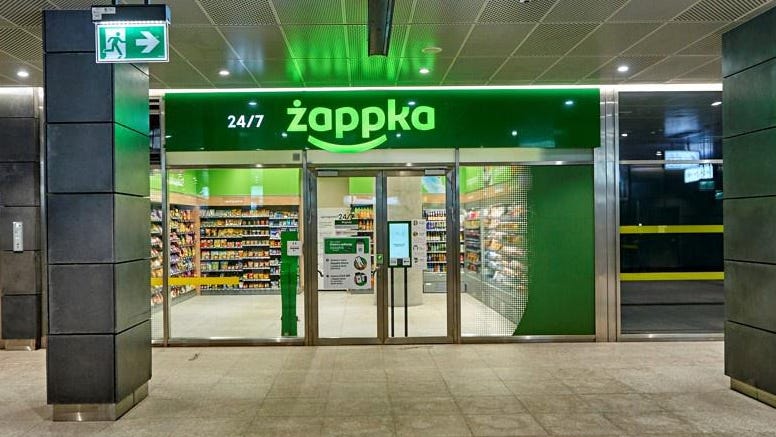 Polish convenience giant Żabka Group has completed the opening of the largest chain of autonomous stores in Europe after launching 25 stores under the Żabka Nano and Żappka banners—with at least another 12 set to be added by March. Using contactless, AI-powered computer vision technology from U.S. tech player AiFi—a system similar to Amazon’s Just Walk Out set-up—the concept enables shopping to be checkout-free and fast.

The stores—open 24/7—focus on grab-and-go items like snacks, food and beverages, including a range of the company’s own-label lines. Depending on the format, they stock from 450 to 1,500 products excluding regulated items such as tobacco and alcohol. “There are no baskets, so customers just pick up what they need and leave at any time of the day,” Pawel Grabowski, head of unmanned solutions at Żabka, told me.

The Nano concept is opening up new, incremental spending for the retailer, at times and/or locations that were previously not accessible. Żabka is also looking at the societal aspects of Nano. One of the formats—a standalone, brightly-lit container-based shop—is being tested in isolated streets or in parks where there was no retail present before. “As well as offering convenience, the lighting adds an element of safety and even a social space. These units can transform what can otherwise be dead spots in some areas,” said Pawel Grabowski.

So far, several thousand people have used the camera-based, computer vision format and the retailer is monitoring the data and customer satisfaction levels. The next set of autonomous outlets are on their way, and like the current batch, will mainly be in high-footfall locations with some positioned near to workplaces that don’t have easy access to shopping, and other places where the commercial possibilities look enticing. Right now airport are not a target but hospitals and gyms will be.

While Żabka is using AiFi’s computer vision technology, it has integrated its own app called Żappka. “When you open the door you are already identified (through the app via a QR code) and you can freely walk around,” noted Grabowski. Without the app, that ‘just walk in’ option is slowed down a bit for a first-time user. New visitors without the loyalty app can use any bank card to register their presence and then enter their mobile telephone number so that communications such as receipts, billing and customer queries can be made. Both customer journeys have been developed with some hardware modifications from Żabka Future, the technology arm of the retailer and a business incubator for new ideas. In addition, the system does not use biometrics or facial recognition to identify customers to guarantee full privacy and security.